One of the key considerations for any company looking to install a folding partition or movable wall system is the level of soundproofing they require, which in turn determines the acoustic performance they need their partition product to achieve.

So what exactly is sound, how is it measured and how can it impact your decision on which partition system to install within your building?

It’s all around us, so much so that we sometimes don’t even notice it…it’s often only when it’s absent that we become aware of it. We’re so used to constant sound that many of us can’t cope without it, so we turn the radio on for company…but what is sound, and how does it work?

Sound is a form of energy that starts when a noise is made and then travels through matter, be it solid, liquid or air, causing the molecules in that matter to vibrate and pass the noise on to the molecules surrounding it. The “looser” the molecular structure, the easier it is for it to vibrate and for the sound to travel…unless there are no molecules at all, which is when sounds cannot travel, as in space.What’s interesting is that sound doesn’t travel in a straight line, it travels in waves, with those waves becoming more “choppy” as the frequency of the sound rises. The more “choppy” or close to each other the waves, the shorter the wavelength, with the waves being measured in cycles per second, or Hertz (Hz), dependent on the speed they pass a measured point – hence Short Wave and Long Wave on the radio.Two other measures are important, “amplitude”, which is a measure of the strength (volume) of the vibrations in the air, and echo, the amount of sound left after it has hit a surface and is bouncing back…which tells you how much has been absorbed.Measuring SoundWhen measuring the strength or volume of sound we use “decibels” (dB).  To make things simple assume one decibel is as close to the Just Noticeable Difference (JND) for sound levels as you can hear.  The actual definition of a dB is based on logarithmically derived differentials between two sound sources at differing volumes.If you assume this basis you get:Nearly silent = 0 dB10 times louder than nearly silent = 10dB100 times louder than nearly silent = 20dB1000 times louder than nearly silent = 30dBLoudness, and how sound effects us.Loudness is a personal thing, it’s our own impression of the strength of the sound we’re hearing and can vary considerably between 2 individuals.  In addition, if we’re hearing two noises at a similar frequency, one can cancel some of the other, so that although the sound levels may be high the perceived loudness may not be.Humans have the capacity to hear from roughly 20Hz to 20,000Hz, but hear most acutely from about 100Hz to 5000Hz, with each of us able to hear more or less depending not just on our age and infirmities but on what noises are particularly unpleasant to us. Typically, then, we can say the following:Nearly silent = 0dBA whisper in a quiet library at 2m = 30dBNormal conversation at 1m = 60dB to 80dBCity traffic from inside your car = 85dBPneumatic drill at 15m = 95dBMotorcycle = 100dBRock concert = 115dBSustained exposure above 90dB to 95dB can result in hearing loss, and above 125dB can be painful.Sound Absorption and InsulationUnderstanding what sound is and how it effects us enables us to control the impact it has on us within different situations.The first thing to understand is the difference between the terms sound absorption and sound insulation.  Essentially insulation will affect the people in another room whilst absorption will affect those in the same room.We’ve already established that sound is an energy. If we can capture and absorb sound as it hits a surface and convert it into a different energy, heat, then the amount of sound able to bounce off the surface as an echo and be heard will be reduced.  The reduction in sound is measured as a co-efficient from 0 to 1.0, with 1.0 the best.Partitions and Noise Control in your BuildingThe degree to which you will be able to control noise in your own building will very much depend on your start point. If your building is inherently noisy it will be harder to control, and this will depend on its original design, the materials used in the construction and the general quality of the build.These factors will mitigate against effective noise control, as will what is called “flanking transmission”, the “leakage” of sound over or around the edges of the partition, and, more significantly, through floor or ceiling voids and along piping and conduits.All the above can be measured and compensated for to achieve the noise control you require, but there is a further consideration, the likely maximum level of sound on one side of your planned partition or wall in comparison with the desired levels in those surrounding it.Folding or sliding partitions and operable walls are quick and easy to operate, designed to last and aesthetically pleasing, but the calculation of likely and required sound levels may determine your choice of the wall or partition you use. 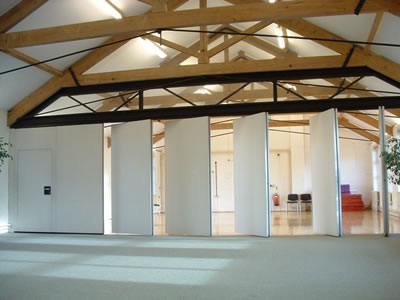 Operable Wall systems give the highest level of sound insulation (59 decibels) and are therefore the ideal choice where high level acoustic performance is required.When a top hung system is not possible then a Multi folding Partition also gives good sound insulation (38 – 45 decibels) and certainly works well in offices, especially those where hot desking is prevalent, they’re also ideal for hotel meeting and function rooms and other rooms where the buzz of conversation can be intrusive.Where cost and flexibility are of greater concern than pure acoustic performance a Fabric Concertina Partition is probably a more realistic option, however that does not mean that you won’t achieve any noise reduction as they can provide between 15dB and 35dB, depending on your choice of product.