Believe it or not history can tell stories all across the world simply by showing us walls, whether still standing or nothing but a few remains. Think about it, the Great Wall of China depicts ancient boarders which protected the Chinese Empire from nomadic tribes or the Western Wall in Israel which many believe was the original Holy Temple.

But what about graffiti? This form of street culture is seen by many as destructive and possibly a little provocative with bold and uncompromising topics. With origins in gang culture, who favoured this form to mark their territory, graffiti is no longer seen as such a taboo but increasingly looked upon as a form of art allowing individuals to express ideas and statements.

So not only can we learn from ancient walls and other structures but increasingly we can look to graffiti for political, cultural and ethical messages of our time. Why don’t you take a look at a few of these famous messages in the form of graffiti:

Known only as Invader this French Urban artist is recognised for continual homage to the classic 1980s arcade game, Space Invaders. With that in mind his work mimics the pixilation in 8-bit video games as well as often being recognised for his QR code mosaic works.

Like Banksy, Invader works in anonymity and even wears masks during interviews to protect his true identity. Since they are often relatively small in size his mosaic pieces can be hard to come by, which is exactly the angle Invader plays once stating his graffiti is “suspended between visibility and anonymity”. Take a look here

Famous pseudonymous British artist Banksy is a household name the world over. In the last 20 years he has produced works which focus largely on politics, yet his identity has managed to remain a mystery. 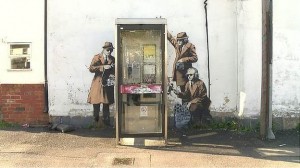 In April 2014 the artist, who we know originates from Bristol, left this image on the side of a home in Cheltenham. The artwork depicts three spy’s gathered around a real telephone box with a range of listening equipment. The 1950 style spy’s are believed to represent the British Government Communications headquarters who are located only a few miles outside of Cheltenham city centre.

Another famous Parisian graffiti artist, Blek Le Rat is considered by many as the “Father” of stencil based graffiti and often stated as an influencer for the likes of Banksy. 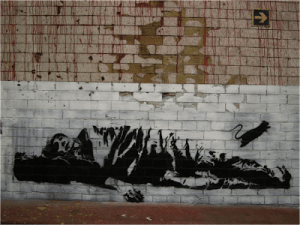 His name originated from the images of rats he painted around Paris during his early career before exploring more serious issues in later years. Still active, Blek Le Rat produces art depicting missing journalist, remembering Princess Diana and explores the plight of homelessness. Take a look at this painting which was discovered in London in 2008. A bit ironic isn’t it? People all across the globe deliberately avoid or even step over homeless people on the street but will always stop to discuss & admire a painting of a homeless person on the wall.

Graffiti is often simply seen as a form of communicating direction with the public in a space which is free from the confines of the formal art world. Whilst we appreciate that graffiti results in widely debated opinions over the question of art or vandalism you can’t deny that artist truly depict a number of issues we are faced with today.

If you are looking for a partition wall, or movable solution for your home or office give our team a call on 01373 454 577. Don’t worry, we promise they’ll be nothing but excellent service and not a stencil or spray can in sight.